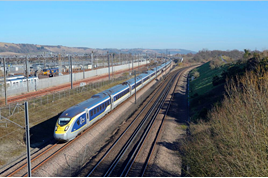 A shake-up of transport taxes is needed to create a ‘level green playing field’ that better reflects how environmentally damaging each mode of transport is.

That’s the proposal submitted by the Rail Delivery Group to the Government’s Decarbonising Transport: Setting the Challenge consultation. It could mean using increased taxes on air routes that are in direct competition with trains to reduce prices for long-distance rail fares.

Currently, fuel for passenger aircraft is exempt from tax, whereas train operating companies have experienced a doubling in levies in the past four years on electricity used to power trains.

According to official statistics, CO2 emissions from domestic rail journeys are more than six times smaller than a domestic flight, while the aviation sector is predicted to become the largest contributor to UK emissions by 2050.

RDG says that tackling this tax discrepancy would incentivise people to make greener choices when travelling either in Britain or to international destinations.

It estimates that a reduction in fares on 80% of long-distance trains would encourage an additional 300 million people to travel by rail over the next decade.

“To help Britain reach its target of net zero emissions, transport taxes should reflect how polluting a journey really is and encourage people to make greener choices,” said RDG Director of Nations and Regions Robert Nisbet.