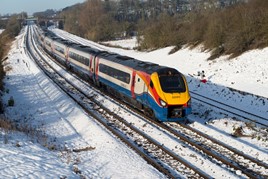 Local community leaders have slammed the decision to withdraw peak-time inter-city services operated by East Midlands Trains from Bedford and Luton from May 2018, labelling it a “disgraceful betrayal” of rail users.

The timetable change will mean that southbound services between 0700-1000 and trains travelling north from 1600-1900 will no longer stop at the two towns.

EMT Managing Director Jake Kelly said the move was necessary in order to accommodate an increase in Thameslink services between Bedford and London to seven trains per hour at peak times. It was also aimed at protecting journey times from the East Midlands and the North from the subsequent squeeze in capacity on the southern end of the Midland Main Line (MML).

“In order for this to be successfully introduced by the Department for Transport and Govia Thameslink Railway, we have had to make some changes to our timetable to allow the additional GTR train services to run on the lines we share into London,” he said.

“Overall, our new timetable represents a largely positive story for customers in the East Midlands and South Yorkshire. While some trains may have slightly longer journey times than today, the extra capacity provided by the new timetable, coupled with some headline journey improvements, will deliver a significant boost to our customers.”

Bedford Mayor Dave Hodgson has led the chorus of disapproval from stakeholders along the southern portion of the MML, and has started a petition against the cuts. He criticised the lack of any consultation, and said he would be “insisting on a reversal of this shocking loss of services” from Government, Network Rail and EMT.