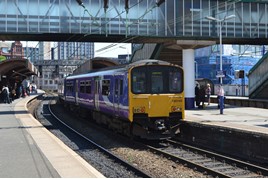 “If we are going to rebound and recover from the impact of COVID-19, we need a greater emphasis on infrastructure.”

That was the immediate reaction from Midlands Connect Director Maria Machancoses, just minutes after Chancellor of the Exchequer Rishi Sunak delivered his Summer Statement on July 8.

It had been hoped that transport and infrastructure spending would be included in the plans, with Government consistently saying in recent weeks that major schemes such as building Northern Powerhouse Rail would help the economy recover.

However, in the Summer Statement, Sunak made no mention of any rail projects, while also confirming the winding down of the furlough scheme by the end of October.

“The Government has said it is seeking to ‘build build build’ and has recently spoken of an ‘infrastructure revolution’, calling publicly for shovel-ready projects to help reboot a green economy post-Coronavirus. Yet we are concerned that no accelerated rail infrastructure projects were mentioned today, such as those in the Government’s own list of 58 rail enhancement schemes directly within its power to speed up,” said Railway Industry Association Chief Executive Darren Caplan.

“The Chancellor specifically unveiled a ‘Plan for Jobs’ - yet in the current circumstances, few sectors can generate jobs and GVA as quickly as rail.”

Machancoses added: “By accelerating the development and delivery of long-term projects such as HS2 and Midlands Engine Rail, the Government can create high-value jobs and stimulate sustained investment and regeneration over the next decade. This certainty and commitment is what businesses need.”

She said more details were needed ahead of the next round of announcements in the autumn.