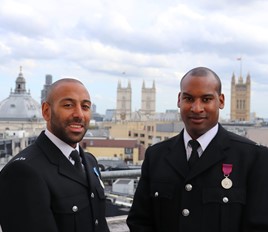 British Transport Police officer PC Wayne Marques collected his George Medal from Her Majesty the Queen on October 11, for his heroic actions during the London Bridge terrorist attack on June 3 last year.

Marques, who was given a Judges’ Special Gold award at the National Rail Awards 2017 (RAIL 837), was joined by PC Leon McLeod who received the Queen’s Gallantry Medal.

On that night in the capital, three terrorists killed eight people. Marques was seriously injured after confronting knife-wielding attackers armed only with his baton.

McLeod was with Marques, and ran after the attackers and gave vital first aid to injured people, helping to carry people to safety despite the danger to himself. He said: “It means the world to me to stand in front of Her Majesty the Queen today to receive this unbelievable honour. I never thought I was being courageous, I was only trying my hardest to help those who were so critically injured.

“I’ll never forget what I saw that night, but I will also not forget the bravery of every emergency responder. Today is a poignant moment in the shadow of brutal and shocking attack, where innocent people lost their lives.”

Marques said: “I am only able to stand here today thanks to the inspirational work of my therapists, family, colleagues and friends. During the early dark days, you were all there for me, helping me regain my strength and reach a position where I could return to work.

“It is such a privilege to stand in Buckingham Palace today in front of Her Majesty the Queen and receive the George Medal. I never expected my policing career to come to this point.”