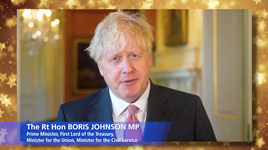 Prime Minister Boris Johnson has given his heartfelt thanks to “the entire railway family”, for what he described as their heroic efforts to keep the country moving during lockdown.

In a speech at RAIL’s virtual National Rail Awards on September 17, which has been viewed by more than 1,000 people, Johnson delivered a powerful vote of confidence in the railway’s future.

He said he doesn’t think the crisis has ended the “human desire to move around quickly and efficiently” and reconfirmed that “we will deliver the biggest investment in the railways since the Victorian era”.

The PM’s speech was joined by a further 19 messages of thanks from leaders across the Government and railway community. All had been asked if they would like to provide a short video to thank railway staff for their efforts during 2020.

Messages were also broadcast from: