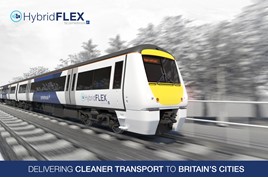 A letter of intent was signed at the exhibition which covers the delivery of hybrid systems for installation on two test trains. After the testing programme is completed, Porterbrook plans to offer Class 168 and Class 170 operators conversions to their existing fleets.

At the core of the MTU Hybrid PowerPacks is a Euro V-compliant 6H 1800 diesel engine coupled to an electric machine which can be used as an electric motor or generator, and an MTU EnergyPack battery system which stores energy recovered during braking. The stored energy can either be used to boost performance during acceleration for journey time reductions or to provide emissions-free electric operation in urban areas and around stations.

Porterbrook and Rolls-Royce claim that fuel consumption and CO2 emissions could be reduced by up to 25%, nitrogen oxide emissions by up to 70%, and diesel particulate emissions by up to 90%. Noise levels in stations - if operators opt to use battery power in those circumstances - are expected to fall by around 20dB(A), around 75% lower than under diesel operation. Furthermore, the parties claim that operating costs will be lower because of lower fuel consumption and wear on braking systems.