Plans for Wessex supervisory board 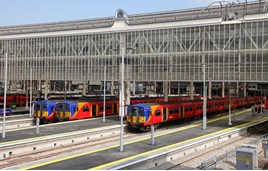 Network Rail’s Wessex Route Managing Director Becky Lumlock has confirmed to RAIL that preparations are currently being made to create a route supervisory board for Wessex.

Once complete, Wessex would join NR’s Western, London North Eastern and Wales routes, each of which had their own supervisory boards created earlier this year.

Supervisory boards have been created in order to bring track and train operations closer together, and to encourage more aligned strategic decision-making through senior representation from train operating companies, NR and Transport Focus.

NR has committed to having them in place across each of its eight geographic-based route businesses by spring 2018, although Lumlock says she is targeting the end of 2017.

She was unable to confirm to RAIL which individuals would sit on the Wessex supervisory board or who would be its independent chairman, as NR is still in the process of recruitment.

Lumlock has also been observing meetings of the Western supervisory board in order to learn best practice.

In an exclusive interview with RAIL, she said: “We were unable to be the first route to have a supervisory board because we had a major franchise change (in August), but we’re currently looking for an independent chairman and I’ll be liaising with key stakeholders who would sit on that. I’d like to have everything in place by the end of the year.”