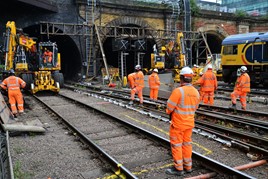 Network Rail has confirmed an extensive programme of closures and part-closures of the East Coast Main Line between Grantham, Peterborough and London King’s Cross, as part of its £1.2 billion East Coast Upgrade.

The upgrade has been designed to yield two additional long-distance high-speed paths between London and Doncaster by December 2021, via a suite of interventions including the construction of a grade-separated junction at Werrington, and the remodelling of the approach to King’s Cross.

The key dates include a three-month part closure of King’s Cross from March 1-June 4 2021, when a reduced peak-time service and amended timetable will operate.

A full closure of the London terminus is also planned at Christmas and over a number of weekends, including January 30-31, February 26-28, April 23-25 and June 5-6.