Pacers continue in traffic in 2021 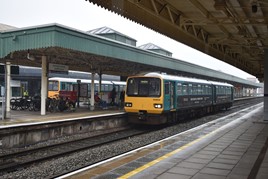 Welsh Pacers have been granted dispensation to run until May 31 this year, some 18 months after the trains were due to have been withdrawn.

Transport for Wales will continue to use 15 two-car Class 143s, despite the trains failing to meet accessibility regulations that came into force at the start of 2020.

The trains, which were originally due to have been withdrawn by the end of 2019, have instead been granted a reprieve as their Class 769 replacements are not yet all in traffic. TfW has been able to dispense with its Class 142s, but requires its other Pacer fleet to provide capacity on the Valley Lines.

TfW is one of four operators that received permission to continue operating trains that do not meet the full accessibility requirements, with East Midlands Railway, Greater Anglia and Northern also affected.

Department for Transport published letters on December 28 2020, signed by Rail Minister Chris Heaton-Harris, permitting the four operators to continue using the fleets until May 31.

In total, 467 non-compliant vehicles received dispensation. GA has the largest non-compliant fleet, with 348 vehicles, due to the heavily delayed introduction of Bombardier Class 720 electric multiple units.