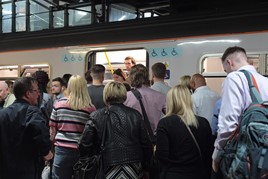 This follows an investigation that found systemic failings in NRs general management of timetable changes. The ORR said this contributed to the disruption caused by the May 20 timetable change.

ORR investigators found NR did not implement best practice into timetable planning, and this was evidenced, it said, by the need to rewrite the May timetable change seven weeks after the draft was sent to the industry in November 2017. This meant timetables could not be finalised 12 weeks in advance.

The four actions are:

John Larkinson, ORR’s Director, Railway Markets and Economics, said: “Network Rail’s failings in the run-up to the May timetable led to massive disruption, uncertainty and inconvenience to passengers.

“Network Rail has acted to bring the industry together to address timetabling issues but more and faster change is needed to provide assurance to passengers. That is why we have set out these actions designed to improve capability within Network Rail.

“Our ongoing broader Inquiry is looking at the role of the whole industry in the May timetabling problems and this may lead to further recommendations.”

Jo Kaye, managing director, System Operator, Network Rail, said: “We accept the findings of the ORR investigation into why timetables weren’t finalised 12 weeks in advance. It’s clear from the ORR’s investigation that the issues with timetabling go much further than Network Rail, and we welcome and look forward to the industry-wide inquiry. We remain truly sorry for the part we played in the process that caused disruption for so many people and we have learned lessons to make sure it is not repeated.

“We are already putting the ORR’s required plan into action including establishing new joint working arrangements with train operators to support development of the timetables for December 2018 and May 2019.”

Transport Focus Director David Sidebottom said: “Passengers want timetables finalised in good time - 12 weeks is the standard - so they can plan their trips with confidence and get the best-value Advance tickets. They then want the trains to run reliably. That simply hasn’t been happening on parts of the railway. Our research shows just how much of an impact both of these have had on passengers.

“Ahead of conclusions from the wider Glaister Inquiry into the recent timetable crisis, passengers will welcome focus on successful delivery of the December 2018 timetable and on getting back as soon as possible to publishing accurate information 12 weeks in advance.”