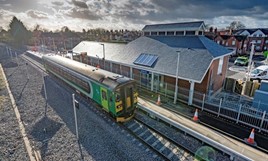 The opening of the much-delayed Kenilworth station (RAIL 850) has moved a step closer, after gaining final approval from the Office of Rail and Road (ORR).

HM Chief Inspector of Railways Ian Prosser confirmed on April 12 that he had given authorisation for the new £13.6 million station to open, after receiving outstanding paperwork from project sponsor Warwickshire County Council on March 20.

WCC Joint Managing Director Monica Fogarty said that a firm opening date would be announced as soon as possible, adding: “I am delighted to say that the ORR has passed authorisation for entry into service subject to a number of outstanding items being finalised.

“All partners have worked extremely hard to move this forward so that the station can open as soon as possible. Once these have been finalised, we will be in position to confirm the date for the station to open.”

ORR approval has also been welcomed by the station’s operator West Midlands Trains, with a spokesman describing it as a “significant step forward”.