Northern says a final farewell to its Pacers 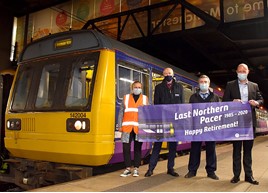 The final Pacer-operated train in northern England ran on November 27, almost a year later than planned, when 142004 formed the 1636 Kirkby-Manchester Victoria.

It brought to a close more than 35 years of Pacers operating in the region.

“The Pacers have kept millions of Northerners on the move. And while they have served us well and provided some communities with rail services they may have otherwise lost, it is time to give them a well-earned rest,” said Northern Regional Director Chris Jackson.

Secretary of State for Transport Grant Shapps added: “The Pacer fleet has connected communities on the Northern network for over 30 years, but today marks the sun finally setting on trains that have become loved by some but hated by many.”

Pacers remain in use with Great Western Railway and Transport for Wales.