No Sunday service as Kenilworth finally set to open 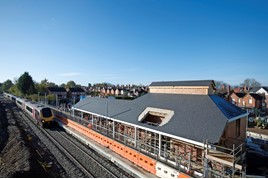 Kenilworth station was due to open on February 26, but with no Sunday service.

Warwickshire County Council’s Joint Managing Director Monica Fogerty confirmed the opening of the £13.6 million station, which has been delayed three times - previously slated opening dates were in December 2016, August 2017 and then most recently in December 2017 (RAIL 842).

West Midlands Trains (WMT) will run an hourly service in each direction between Coventry and Leamington on weekdays and Saturdays, although the Office of Rail and Road (ORR) has confirmed the withdrawal of WMT’s application to run Sunday services owing to timetable clashes with other services.

In a letter available on the ORR website, ORR senior executive for access and licensing Jonathan Rodgers wrote to both WMT and Network Rail on February 6 to confirm that track access had been granted for the new six-day service. It was also revealed that several train and freight operating companies had expressed concerns over the ‘performance impact’ of the new services, since the original application was made on October 13 2017.

CrossCountry had asked what mitigation and contingency plans would be put in place to minimise the performance impact on other services scheduled to use the single-line section of track that runs between Coventry and Leamington, while Chiltern Railways had raised concerns over the ability of proposed rolling stock (a single-car Class 153) to cope with potential overcrowding.

WMT responded to concerns by stating its intention to run a Class 172 unit instead, which would offer superior braking and acceleration to the ‘153’.