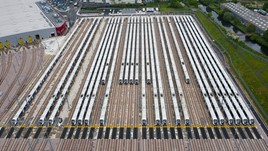 No date has been given for the return to traffic of nine-car Class 345s on TfL Rail trains between London Paddington and Reading.

Crossrail Chief Executive Mark Wild told the London Transport Assembly in a letter dated July 3 that they had been removed from traffic due to a software problem, and that all TfL Rail ‘345s’ in traffic were once again running as seven-car sets (RAIL 909).

Bombardier built the trains at Derby Litchurch Lane. Spokesman Will Tanner told RAIL: “A defect has been discovered that affects the signalling system on some of our Class 345s operating TfL Rail services to and from London Paddington. As a precaution, the nine-car units have been temporarily withdrawn from passenger service while we work to resolve the problem.

“All other Class 345s operating TfL Rail services to and from London Paddington and London Liverpool Street continue to operate as normal. I can’t give you a date when we will be able to return to nine-car operation but will do as soon as I can.”

The Class 345 order for 70 trains was intended for them all to be nine-car sets. However, many of the electric multiple units were delivered as seven-car trains because the infrastructure on the London Liverpool Street-Shenfield route was not long enough for the full-length sets.

That meant intermediate vehicles were either stored at Harry Needle Railroad Company’s Worksop site, or at Old Oak Common. A number of ‘345s’ were eventually delivered to the capital as nine-car trains, while others were extended using the stored intermediate vehicles.