New windscreens for Hitachi ‘385s’ to be fitted in Scotland 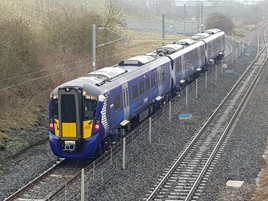 Once a final design for new windscreens has been approved for ScotRail Class 385s, the modifications will be carried out at Knorr-Bremse Rail Services at Springburn.

The electric multiple units, built by Hitachi, are currently unable to enter traffic after problems were encountered with the drivers’ view during mileage accumulation testing (RAIL 850).

A Hitachi Rail spokesman told RAIL on April 17: “We are currently working with manufacturers on finding a solution for the windscreens. Once the new design gains the necessary approval from regulators, they will be installed on the Class 385s.

“The new windscreens will be installed at Springburn in Glasgow. Using a rail services facility in Scotland will help to ensure the trains are ready to enter into service as soon as possible.”

The trains were due to enter traffic last December between Edinburgh and Glasgow Queen Street, but delays to the infrastructure meant they could not be tested on that line until October.

The windscreen problem was discovered during a test run between Glasgow Central and Paisley Gilmour Street. Drivers’ union ASLEF explained at the time that because the windscreen on the ‘385’ is curved, at night it was making drivers see two signals. The view was compared to looking through a fish bowl.