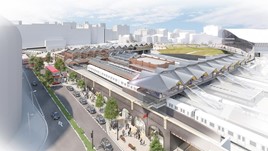 The first images of what a redeveloped Birmingham Moor Street station might look like have been revealed by West Midlands Rail Executive.

These early designs form an integral part of WMRE’s ‘One Station’ concept to integrate Birmingham’s existing city centre stations at Moor Street and New Street with the new station for HS2 currently being built at nearby Curzon Street.

Proposals for Moor Street include more than doubling the size of the concourse, and the introduction of two new platforms.

WMRE says this is needed to accommodate an expected increase in passenger numbers from seven million to 12 million per year by 2043. Further increases are expected from the arrival of HS2 in 2026, and under Midland Connect’s Midlands Rail Hub proposals to increase the number of conventional services arriving from Hereford, Worcester, the South West and the East Midlands.

Plans for Moor Street include a new footbridge with access to every platform and a direct link to HS2 services at Curzon Street via a new public square.

A second entrance to the south of the station is also proposed, to avoid overcrowding and improve access to the Digbeth area of the city.