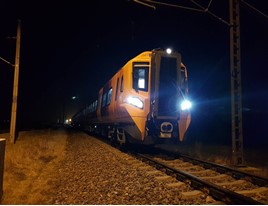 The first four-car Class 196/1 has started testing at the Velim test track in the Czech Republic.

They will enter traffic in the second half of this year, although no specific date has been announced. Those built in Spain will begin arriving in the UK in the spring, with the rest built at the company’s Newport factory.

WMR plans to use them to increase capacity on the Hereford-Birmingham route, where they will replace Class 170s.