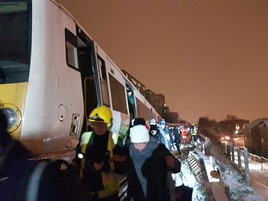 Network Rail and Southeastern will deliver new training for 3,500 staff following the stranding of trains at Lewisham on March 2.

An independent report published today recommends improvements to command and control arrangements, while also stating that industry procedures for stranded trains need revisiting to avoid a similar situation in the future. It found that lessons must be learned in the way disruption is managed and how information is shared.

Passengers evacuated themselves from trains that were stuck due to poor weather conditions.

An independent report by consultants Arthur D Little and Southwood Rail Consulting examined the circumstances behind the incident, at the end of a week of extremely cold weather, including snow, ice and freezing rain over much of the UK.

Other recommendations from the report include:

In a joint statement, Southeastern Managing Director David Statham and John Halsall, Network Rail’s South East Route Managing Director, said: “Winter weather conditions in 2018 were the most challenging we’ve seen in the South East for more than a decade. Unfortunately, this led to a very serious incident in Lewisham, and we’re determined to learn from what happened.

“We sincerely apologise to passengers for what was an unpleasant and distressing experience. Our staff worked exceptionally hard in extremely difficult circumstances, but the number of trains involved in this incident made it difficult to co-ordinate a response.

“Both Southeastern and Network Rail are taking steps to minimise the possibility of this happening again. We are improving our management of extreme weather, examining ways to keep the power on when conductor rails fail and updating our procedures for communicating with passengers in an emergency.

“We would like to emphasise that the safest option for passengers is to remain on board and await help, even in the exceptionally unusual scenario of a train getting stuck between stations.”

The remit of the report was agreed in consultation with consumer bodies London TravelWatch and Transport Focus, as well as with trade unions.