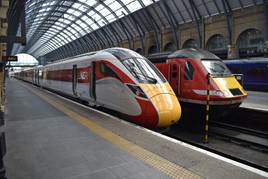 On LNER, the fleet age fell 5.4 years to 25.7 years, although the Hitachi Class 800s were introduced from May, after the calculations are complete.

Caledonian Sleeper’s rollout of new Mk 5s almost halved the age of the operator’s fleet - by 18.9 years to 19.6 years.

The age of stock is calculated as at the end of March 2019, against the same time period the year before. If a vehicle is no longer leased by the operator, it is removed from the dataset.

An ORR spokesman further explained: “The average age is based on when the train operator started hiring the vehicle. For Caledonian Sleeper and LNER the coaches were hired or built in 2018-19 and then they didn’t put them into use for passengers immediately.

“The data we receive doesn’t tell us when the rolling stock was first introduced for use by passengers, only when the train operator hired it. The delay could be due to testing, safety checks, and so on.”