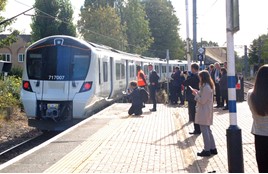 The first Class 717 carried passengers on the Great Northern network on September 28.

The six-car dual-voltage Desiro City (717007), built by Siemens in Krefeld, Germany, ran from Moorgate to Gordon Hill. The remaining 24 sets will enter traffic in a phased introduction between now and next Spring.

They provide 27% additional capacity compared with the Class 313s they will replace. The older EMUs date from 1976/77.

The Class 717s are funded by Rock Rail Moorgate (a joint venture between Rock Rail Holdings and Aberdeen Standard Investments) in a £240 million deal. They feature air-conditioning, power sockets and WiFi.

The trains will be used on the GN network from Moorgate to Stevenage, Hertford North and Welwyn Garden City.

Gerry McFadden, GTR Director of Engineering said: “They will all be the maximum length for this route. As well as air conditioning, power points, and free Wi-Fi, there are real-time passenger information screens to make travelling with Great Northern a much more comfortable and convenient experience.”