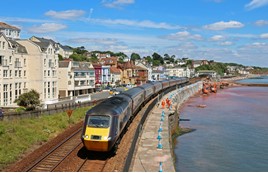 Work on construction of a new sea wall at Marine Parade, Dawlish, has temporarily ceased, to minimise the impact on tourism during the peak summer season.

Construction work has been taking place around the tides, and around the clock. It finished on July 14 and will start again on September 9.

Network Rail says that when the wall is completed, it will be some 2.5 metres higher than the existing structure, have a curved edge to send waves back towards the sea, and have a wider promenade.

Critics have suggested it will ruin the resort’s unique feel. However, David Lovell, NR senior programme manager for the Dawlish sea wall project, responded: “Dawlish relies heavily on tourism, and we want to minimise any impact while we deliver the new sea wall, which will help protect the town and railway for the next 100 years.”