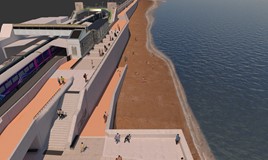 Plans for making the area around Dawlish station more resilient to bad weather and high tides have been unveiled by Network Rail.

Forming the next stage of the area’s resilience work, they include a taller sea wall with high-level promenade, new pedestrian access to the beach, and a new accessible footbridge for the station.

The 415-metre section, for which no costs have been revealed, also includes a new bridge linking the station site with the western section of the heightened sea wall (for which work is nearing completion).

The westbound platform will be reconstructed and realigned to reduce the gap between the platform edge and trains. It is expected that the high-level promenade will also reduce overtopping and spray reaching the platform while trains are running.

The existing ‘stilling basin’ boundary wall will be rebuilt on its existing footprint, with a stronger structure designed to take the energy out of the waves and extend the life of the basin. This is expected to reduce the volume of beach material being deposited under the railway viaduct.

However, Network Rail acknowledges that depending on rising sea levels, further work could be required in 30 to 40 years.