NATIONAL RAIL CONFERENCE EXCLUSIVE: "Embrace change or be mown down by it" - Plummer 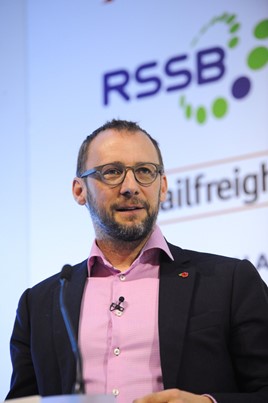 The rail industry “must embrace change or be mown down by it” in the fight against climate change.

That was the warning from Rail Delivery Group Chief Executive Paul Plummer, who said the sector must play its part in reducing air and car journeys, in addition to cutting air and noise pollution.

To do otherwise would risk increased damage to rail infrastructure as a result of extreme weather events, such as the widespread flooding that closed parts of the network in northern England in early November.

Plummer rued the lack of progress that has been made despite the number of years that have elapsed since global warming was thrust into the public consciousness by former Prime Minister Margaret Thatcher in the 1980s, the signing of the Kyoto (1997) and Paris climate change (2016) agreements, and the more recent protests led by the Extinction Rebellion group of activists.

He said: “Hanging over us like a sword of Damocles is the threat of climate change. These extreme weather events are caused by our carbon emissions, and the warnings have been there for decades - yet temperatures still rise, and the oceans fill with plastic.