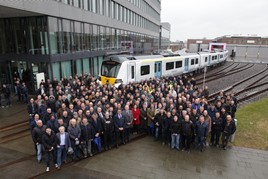 This represents the industry’s most intensive fleet implementation, with all 115 trains delivered on time, by May 2018. The Class 700 fleet introduction involved 1,140 new vehicles being delivered in 30 months (averaging nine per week).

The trains are 30% lighter than previous units on the route, which has been achieved by using aluminium body shells and elimination of duplicated equipment by the use of a fixed formation train with a single set of controls. This also means they are 20% more fuel-efficient.

The reliability of these eight and 12-car trains has now reached 10,000 miles per incident.

Judges felt the design of the doorways and interior space was good for passenger flow, with more than the usual space allowed for luggage on a route serving Gatwick and Luton Airports. The judges were also impressed that there are no seats without windows, which compares favourably with other train designs.

Overall, they felt that this was probably the most successful and significant train introduction programme, with a train that sets new standards in life cycle design, operational efficiency and passenger amenity.