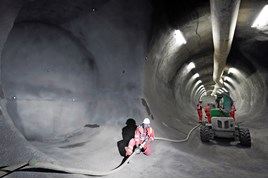 The winning project is the culmination of a £350 million, seven-year project that has also contributed to the regeneration of a major part of London.

Tottenham Court Road has undergone a transformation all the time while the station remained open, and a new tunnel was also built above the Central line without disrupting that railway too.

The ticket hall has been increased by a factor of six while new escalators and access tunnels have been installed.

There was an added factor in that London Underground required the station to remain operational during each Christmas season, which added significant constraints to the programme.

The project is described as “the first step in transforming the West End”.

The design for the project included preservation of 98% of the Paolozzi mosaics that also won a heritage award. Colour coding of different exits has been introduced, and the National Rail Awards judges say this has worked well in practice, with positive passenger feedback and passenger throughput significantly higher already than anticipated.

The redeveloped station is now fully ready for Crossrail, while there is also provision for Crossrail 2 if and when that project is approved. At this point, it is expected to accommodate 200,000 passengers per day. There is step-free access from street to platform too.

The project itself involved extensive use of sprayed concrete linings, and involved construction of a new tunnel just above the Central Line running lines without interruption of services. Works reach from a new public space to tunnels and shafts up to 29 metres below street level.

The scheme was delivered through a non-contractual joint venture, however judges said it was there had been effective working between the contractors and LU to ensure the successful delivery of the project.

Judges felt this was a complex and engineering challenge in a very confined area, and without shutting the station, and that it met all the criteria for this category. It was delivered on time and to budget.

A £940 million project completed in three phases that was the last major project to upgrade the West Coast Main Line.

The three phases were line speed improvements between Crewe and Norton Bridge, Stafford resignalling which included a new freight loop and a grade-separated junction at Norton Bridge.

However, judges said that the distinguishing feature of the project was using a ‘pure alliance’ model including Network Rail. This experience was based on schemes in Australia, and the project’s budget included all costs including Schedule 4 and 8 payments. The risk was fully shared and decision making was unanimous. NR proposed this method of working and wishes to use it elsewhere.

Modularised bridges were installed across the WCML with no disruptive possessions.

The £300 million signalling renewal project in the Cardiff area is claimed to involve the single biggest phase commissioning undertaken by Network Rail.

New technology and innovation was deployed including a ‘real virtual wall’.

The scheme was on time, although slightly over budget. Judges say it is already demonstrating benefits for the Welsh capital, with sporting events in particular being able to be served in a much better way than before.

Organisation of the project was a development of the conventional hub and spoke mode.

This was not a formal Joint Venture company, nor was it a ‘pure alliance’ in the same way as the Staffordshire scheme, yet it is claimed the same benefits were enjoyed.