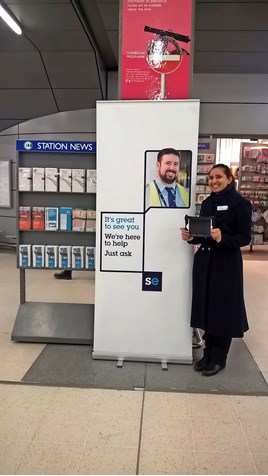 Southeastern operates one of the biggest and busiest commuter services in the country. It moves over 640,000 people everyday from Kent and East Sussex to five major London stations. That’s more than 170 million passenger journeys a year.
That’s over 640,000 people who need to have an enjoyable experience every day, not to mention over 640,000 potential problems!
Refurbishing trains, refurbishing station and improving customer information services led to an increase in satisfaction across these areas in the National Rail Passenger Survey. This was good but not good enough for Southeastern, which wanted to further improve the customer experience at station, particularly the helpfulness of staff, the information they had at their fingertips and their availability.
The result was Ambassador Pilot.
Southeastern picked its two busiest stations - London Cannon Street and London Charing Cross and then recruited a specialist team of Ambassadors – customer service champions - dedicated to helping passengers.
The Ambassadors essentially have no operational duties - they’re simply there to help passengers. They don’t have a job description other than just to help. They have their own budget to spend on helping passengers (buying coffees or water) and they have smart uniforms but they don’t look like intimidating high-vis wearing officials.
The four-month trial was deemed a success. Firstly, operational staff had more time to focus on operational matters and more trains departed on time.
Secondly NRPS scores rose significantly in the three categories and more customers felt obliged to comment about the help they had received. One passenger, with a medical condition, received help from Noah at Charing Cross; “I felt like he was not distracted by anything else at the station and was completely focused on me.”
But this was a two-way process and Ambassadors felt good about the service they had given. One recalled, “An elderly woman I helped gave me a hug and called me an angel!”
Southeastern is so pleased with the results that trials are taking place at five other stations and there are plans to roll the scheme out further.
The judges said, “A clear winner. It shows a really different way of thinking and there’s evidence of change from NRPS and amazing customer commendations. Staff are clearly proud of what they are doing. it’s a small intervention that has had a big impact.”

One area that has consistently been flagged for failing to deliver value is Ticket Vending Machines. The bad press surrounding them has got to the point where the UK government and influential industry bodies such as the Department for Transport, and the ORR have demanded action.
Ticket technology expert Parkeon joined forces with Stagecoach Group to provide South West Trains with a ticket vending machine that would transform the customer experience.
The result is IRIS, an integrated video communications system that enables customers using a Parkeon ticket vending machine to speak to a person in a customer service centre about ticket selection, fares and journey planning.
Having visited IRIS installations at SWT stations, the DfT has now encouraged all TOCs bidding for new franchises to include video/audio assistance capability in their plans. There are also now some 700 Parkeon TVMs in stations across the uK and that number is due to grow.
The judges said, “This was not a not a franchise commitment but a change made in response to  Transport Focus and others. Passengers like visible staff who can provide help when they need it – this provides just that in a cost effective targeted way.”