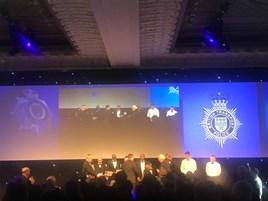 The National Rail Awards judges could not let the 2017 awards pass without honouring and recognising the brave BTP and Northern staff who ran directly into danger to help during the recent terror attacks in Manchester and London. They made four special awards. These are two of them.

The Manchester Arena is part of the very fabric of Manchester Victoria station. The attack here on May 22 was on a very soft target - an Ariana Grande concert largely attended by children and their parents.

The first people to arrive at this scene of “absolute carnage”, within minutes of the explosion, were BTP officers and rail staff - Northern staff and rail security officers who were based at Victoria station.

A young BTP officer (20 years old) with less than one year’s service was on patrol at Victoria station, along with three Police Community Support Officers. One of the PCSOs had less than one month’s service. These officers had people die in their arms in front of their families. Other officers rushed to the area, including a dog handler and his vital companion - an explosives detection dog called Mojo. One officer saved a child’s life by speeding her to hospital in a police vehicle.

Many of these officers were making the most difficult decisions of their lives and their sometimes very short careers. They are trained to know about the risk of secondary devices or attacks. They knew the risks involved.

BTP officers secured the area with cordons, and search teams spent days conducting vital forensic searches. The Disaster Victim Identification (or ‘DVI’) teams then set about the gruelling task of recovering bodies - affording the fallen victims some dignity and decency. They had the difficult task of recovering every scrap of evidence and recording it. Some had been deployed to the Westminster Bridge attack a few weeks earlier.