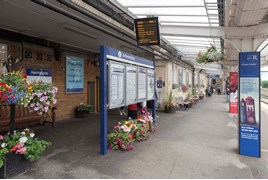 The station has been transformed into a classic medium-sized station that sits in the heart of a famous historic town.

Opened in August 1862, it was designed by Thomas Prosser and was the first building in the town to be constructed using brick. It had two platforms and was lengthened 21 years after it opened. More platforms were opened, but these closed in the 1960s when the station was rebuilt.

Today it offers a modern concourse and friendly ticket and information service. The ticket office is staffed seven days a week except late in the evenings. Ticket machines are also available.

There are retail facilities include a newsagent and café. Transport information has been significantly upgraded in recent years according to National Rail Awards judges who note that staff have added their own personal touch in the shape of window boxes, while they have also filled the waiting rooms with books and photographs.

Today there are three platforms at the station, although only two are in use. Full step-free access is available, and a footbridge links the platforms along with a lift.

There is a regular service to Leeds in one direction and York in the other. The Leeds service doubles in frequency at peak-time to reflect the commute nature of the route.

A morning train to London, running via York, is operated by Virgin Trains East Coast, with a return in the evening.

The station opened in March 2008. Although underground, natural light can be found in the station via translucent ETFE laminate panels that make up part of its roof.

National Rail Awards judges commented on the natural light, pointing out that the station is a rare example of where this occurs.

They pointed out that the station is kept in impeccable order, and is home to some of the cleanest toilets ever visited.

The station is served by Heathrow Express trains running to and from London Paddington. Passenger numbers have risen ever since it opened. London Underground also serves the facility as well.

Heathrow Express has dedicated staff at the station who provide attentive customer service. Judges pointed out that the staff also double as a security search team for what is a busy airport station. Despite this work, the staff still found time to walk the platform greeting tourists to Britain and volunteering help airport passengers with luggage.

Once again, East Midlands Trains’ Loughborough station has made the shortlist in this category – a testament to the care and attention staff have at this facility.

National Rail Awards judges described the three platform station as a “delightful medium station.” The Grade II listed station is served only by EMT, but the services vary from expresses running to London, Nottingham, Derby and Sheffield, and local trains within the east Midlands.

There are ticket barriers at the station along with ticket machines. Cycle racks, a car park, a shop, snack bar and toilets are also all available.

The staff are described as friendly and it is noted that they go out of their way to offer help and expertise to help passengers.

The same staff also provide excellent garden displays on the platforms. The buildings and facilities are kept in excellent condition and the information displays exceeded expectations judges said.