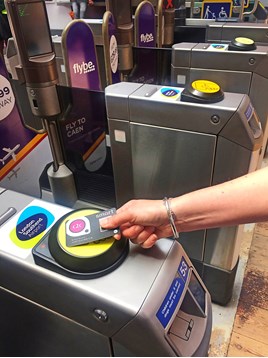 Train Operating Companies have been criticised for making the processes for passengers to claim compensation for delays too complicated and time-consuming, so much so that the latest research from Transport Focus claims that only 35% of passengers claim the compensation they are owed.
c2c has taken a pro-active step to make claiming compensation as easy as possible with its Automatic Delay Repay system. Customers who have a c2c smartcard receive automatic compensation when their train is delayed, without the need to take action for their journeys are tracked through their c2c Smartcard, which calculates which service they were most likely to be on and how late that train was. Full customer transparency is in place, with an app that allows them to track their account, see their own personal punctuality report, and correct us if our automatic systems do get it wrong. Plus, compensation payments start at just two minutes of delay.
Since the scheme went live, an NRPS satisfaction survey recorded a 5% increase in passenger satisfaction with the value for money of their c2c service and it’s driven up passenger take-up of the c2c Smartcard, with over half of all season tickets now sold on the Smartcard. Its impact has gone further as automatic compensation schemes have now been added to the specification of new Government franchises - such as South Eastern’s - as standard not to mention that the Government is consulting on mandating the same principles of automatic compensation in other industries such as the broadband market.
Our judges said, “Passengers frustration with delays is almost matched by that induced by the procedures for seeking compensation. c2c were the first TOC to include a proposal, to automatically make compensation payments, in their franchise tender. Furthermore, they offered to pay compensation for all delays of 2 minutes or more rather than the standard 30 minutes.
“The reaction of passengers has been very positive and further roll out of the system is anticipated. We saw this as easily the most innovative entry and with the potential for a major PR boost for the industry in a high profile area.”

There are many locations on the railway where staff and passengers alike face obvious risk. The platform-train interface is arguably one the less obvious locations but, on average, three people were killed there a year and many more receive serious and life changing injuries.
Arriva Trains Wales found these statistics intolerable but research into reducing the risks at the PTI revealed that there was no one ‘cure all’. However, it did reveal that simple human behaviour of staff and passengers were a major cause of risk, something that no rule book or written procedure could mitigate for.
Solving the issue required some innovative thinking: ATW commissioned VR Simulation Systems in Telford to produce a CAVE (computer augmented virtual environment) simulator. Staff use the simulator and emerge more confident and proactive at identifying and managing risks at the PTI. The training gives staff the confidence to challenge unsafe passenger behaviour.
ATW believes that this project is truly an innovative and revolutionary way of delivering training to our staff. This project is the first ever use of a CAVE simulator for delivering platform-train interface training, marking a major change in the way that it delivers training and development to its conductor and station staff.
Judges said, “This timely and successful initiative was instigated entirely at Arriva's cost. We were impressed by the enthusiasm and commitment shown by the team and hope funds will be found to enable a roll out across not just the whole of Wales but across the country.”