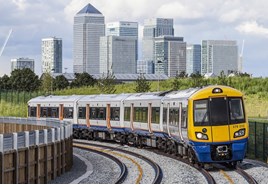 A scheme designed to improve performance of the vital East London Line, which involved collaborative working between two operators and Network Rail.

National Rail Awards judges described the scheme as “desperately needed”. The problem surrounded the dependence on the Sydenham corridor to deliver trains into the core ELL section on time. Regulation is via three control offices at Three Bridges and Victoria.

What makes the trial stand out is that it was carried out on an extremely complex part of the railway. Legacy regulation policies had become increasingly complicated with amendments made over time on an ad hoc basis, and this had created sub-optimal outcomes for East London Line punctuality as trains were arriving into the ELL core late.

The policies had evolved into a complex operating environment for signallers, but because the railway is so intensely used in this section, in the past people had been too concerned about any unintended consequences if changes were made.

The project team overcame these fears by adopting a collaborative and consultative approach from the start which was the key to winning everyone’s support for making the step change.

The project needed to generate enthusiasm for change and the establishment of a practices the not only the companies but also the locations. Twenty-six pages of regulation instructions had to be simplified into a single A4 sheet with four action points. Judges said that with the involvement of different staff at different levels, “the entry represents true collaboration cutting across the commercial and contractual interests of the different parties involved.”

The energy and enthusiasm was spread by the core team and received buy-in from Transport for London as well as the operators and NR. Judges acknowledge that there will have been major barriers in carrying this out as well as the need to challenge standard industry practice in order to complete the scheme. The implementation risk was mitigated by a clear ‘abort’ option based on clear performance impact criteria.

Judges were impressed by the extent to which there was behavioural change. Performance changes demonstrated clearly the benefits of the scheme through a 5% contribution to a 9% Public Performance Measurement improvement. This was achieved with many fewer controller interventions, and a significant reduction in regulation errors as the instructions for signallers had been significantly simplified.

Apart from the identified benefits, the judges were also impressed by the importance of the approach to the success of the Thameslink project that will deliver 24 trains per hours in the area next year.

Additionally, the methodology is transferable. It is likely to be required elsewhere for capacity improvements, not to mention major projects such as Crossrail.

National Rail Awards judges described this as a ‘very complex and innovative project vital to the revised service patterns around Manchester and increased capacity in services with new through routes opened up.’

When completed, the Ordsall Chord, which forms part of the ‘Great North Rail Project’, will provide faster and more frequent services and enable 2,000 extra services per week and 40,000 additional passengers per day.

Challenges included working in a landmark location in terms of rail heritage, tight timescales and multiple stakeholders with clear expectations.

There are strong passenger benefits to be delivered by the is project and some major technical challenges have been included in the project.
Changes to the existing layouts and infrastructure are described as significant by the judges. The blockade management has been characterised by a strong team ethic and there is evidence of teamworking objectives being achieved through high levels of collaborative behaviour at all levels of the project. This is not only to be found in the office and contractually but on the ground too.