More than 1,300 new coaches either stored or on test in UK 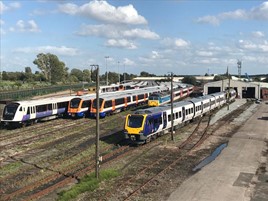 Sixteen different train types are represented in more than 1,300 new passenger vehicles that are undergoing various testing and commissioning in the UK, as manufacturers continue to deliver new trains to operators.

The single biggest number is 423 Class 345 vehicles (47 nine-car sets). These Bombardier electric multiple units should be in traffic on the Elizabeth Line (Crossrail), but remain stored at various locations including Old Oak Common, Derby Litchurch Lane, Maidenhead and Worksop while work continues to deliver the heavily-delayed cross-London programme.

Some of the ‘345s’ are being used for testing the tunnels, while the first nine-car sets have entered traffic on the London Paddington-Hayes & Harlington shuttles.

A year ago, the newest designs delivered were the four-car Bombardier Class 710s for London Overground and six-car Siemens Class 717s for Govia Thameslink Railway.

Fast forward, and the ‘710s’ finally began entering traffic on the Gospel Oak-Barking route in May, some 14 months late, while the AC-only Class 710/1s have yet to carry passengers. Meanwhile, nine of the 25-strong Class 717 fleet have still to enter service with Great Northern.

Other new fleets that have entered traffic in the past year include CAF Mk 5s with Caledonian Sleeper. While all 75 have been accepted by CS, only 32 are used per night as the coaches have yet to be introduced on the operator’s ‘Highlander’ service, so are thus approaching being 12 months late.

Spanish manufacturer CAF is also building diesel and electric fleets for Northern, and the first Class 195 DMUs and ‘331’ EMUs are now in service.

Initially, the DMUs had been planned to enter service last December, but various delays meant they first carried passengers on July 1 - the same day as the ‘331s’.