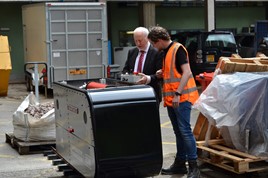 Shadow Transport Secretary Andy McDonald has given his backing to hydrogen train technology, but warns that it should not come at the expense of further electrification.

The alternative fuel has recently emerged as a contender to replace ageing diesel multiple units (DMUs), due to its low emissions and emerging commercial viability. It also requires the introduction of less physical infrastructure than electrifying new routes - the gas can be carried in onboard tanks that are refuelled at the start and finish of daily diagrams, in a similar way to DMUs.

The technology, which combines hydrogen and oxygen in fuel cells to generate power instead of combustion, is currently being developed by students at the Birmingham Centre for Railway Research and Education (BCRRE).

Meanwhile, hydrogen trains built by Alstom are currently on test in Germany, while the train manufacturer is also working with Eversholt to convert Class 321 electric multiple units to hydrogen power for use on the UK network (RAIL 840).

Secretary of State for Transport Chris Grayling has described the technology’s introduction as “a priority” (RAIL 845), with the new East West Rail link cited as a possible route for deployment once construction of the line is complete in the mid-2020s.

Speaking on a visit to BCRRE on July 30, McDonald agreed that hydrogen offers clear environmental advantages over diesel traction, but he added that government should not use it as a way to avoid the cost and disruption associated with extending electrification across the network.