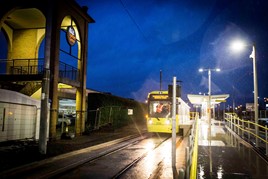 Testing of the route began on December 19, with Mayor of Greater Manchester Andy Burnham joining other stakeholders to take a short ride on the route.

He said: “TPL was the first project to benefit from the devolution deal and is a shining example of what we can achieve with the right powers and funding.

“There is no doubt it is a blueprint for how Greater Manchester could run other transport systems in the future and represents a key step forward on our journey towards a more integrated, London-style transport system.”