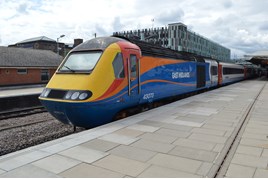 The station is currently served each hour by four to six local stopping services operated by Thameslink, but only one East Midlands Trains service between St Pancras International and Nottingham.

Barton argues that this makes LLA the only major London airport without a dedicated express-style service of four fast trains per hour to the capital. He hopes to rectify that through the refranchising process.

The Department for Transport is currently inviting responses to its consultation document for the new franchise, which commences in August 2019 (RAIL 832).

In the LLA response, Barton will argue that this increased frequency of fast trains could be achieved at no additional cost - by re-timetabling more of the five hourly EMT services that currently depart from St Pancras International and take just 20 minutes to complete the 29-mile journey to Luton Airport Parkway, but which travel non-stop to destinations further north including Leicester, Derby and Sheffield.

Speaking exclusively to RAIL, Barton said the improved connectivity was needed to keep pace with rising demand for air travel nationally, and to help the airport reach its annual passenger target of 18 million passengers by 2020.

The council-owned airport has also applied for planning permission to build a £200m one-mile-long mass passenger transit system linking Luton Airport Parkway with the airport, that could be operational by 2021.

“We will be submitting a detailed response to the consultation, as the importance of the airport for the region and the economy cannot be disputed. It is absolutely critical that we should be looking to maximise the reach of our airport,” said Barton.