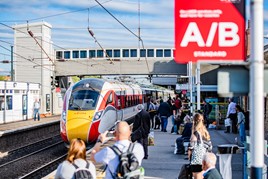 LNER plans to put its new Azuma trains into Anglo-Scottish traffic from August.

However, LNER Engineering Director John Doughty told RAIL on May 22 that depends upon approval to run on electric power north of Darlington.

Currently the Azuma fleet cannot run in passenger traffic to Scotland using overhead wires due to Electro-Magnetic Current (EMC) interference. Doughty said that was due to be resolved by the end of June, in time for the August start. He is also confident that the planned power upgrade north of Doncaster will be ready for testing in August, ahead of being introduced from October.

“Currently two-thirds of our trains through Doncaster are electric and one-third is diesel, but eventually they will all run on electric,” he said.

The work involves completing an electrical feeder station at Potteric Carr, near Doncaster, and Doughty added: “At the moment the feedback is looking good. We have allowed a month for approvals, but there is less ability if the feeder station is delivered late.”

The plan is for nine-car Class 800/1s to be used on the Leeds trains. Currently LNER has 13 on order, of which 12 have been accepted for use. They will be introduced on a weekly basis from May 27.

It’s planned that when the Anglo-Scottish trains begin, the ‘800/1s’ will transfer to that route, with four pairs of five-car Class 801/1 electric multiple units operating to Leeds.