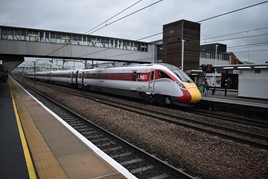 LNER and Hitachi will introduce an action plan by the end of March to tackle poor availability of Class 800/801 Azumas.

The Hitachi trains are being rolled out across LNER’s network, but a number of services booked for nine or ten-car trains are running as five-car sets, including in peak-time, causing overcrowding.

LNER has 43 nine-car and 22 five-car trains on order, and so far some 45 Azumas have been accepted for traffic. The operator requires 37 per day, but the number available has dropped to 31 or 32 on several days, resulting in the shorter trains.

An LNER spokesman told RAIL: “We have recently experienced a shortfall in availability of Azuma trains for our services, which has required last minute changes to the formation of the available trains.

“When this shortfall has occurred, it has sometimes resulted in varying combinations of five-car, nine-car and ten-car Azuma configurations, which have been different to the original plan.

“We have worked closely with Hitachi to investigate the causes for the shortfall and agreed an action plan that will improve planning processes.

“This action plan will take some time to put in place, and we are working hard to minimise disruption to our customers."