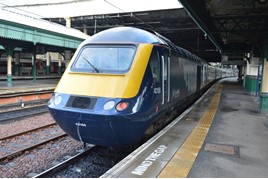 Up to 26 ScotRail Mk 3s will be refurbished and modified at Wabtec Rail’s Kilmarnock facility, in a move designed to speed up the delayed introduction of the Inter7City High Speed Train fleet.

So far, two of the 26 sets are in traffic. The first entered service in October (RAIL 864), when they should have been in use from May last year. The condition of the stock transferred from Great Western Railway, as well as problems recruiting staff, have been cited as reasons for the delays.

Each Mk 3 is being fitted with sliding doors and controlled emission toilets, as well as undergoing a full refurbishment. However, it has been discovered that each coach is different, owing to their being hand-built in the 1970s.

Wabtec said on February 1 that it was developing a second production line at its Ayshire facility, creating and securing around 100 jobs. It expects the first vehicles to arrive at Kilmarnock during Q2 this year (April-June).