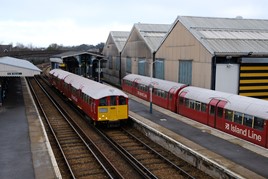 The oldest rolling stock on the national network has been retired from service after almost 83 years in operation.

The 1938 Class 483 former London Underground trains on the Isle of Wight ran a final day of service between Ryde Pier and Shanklin on Sunday January 3. The Island Line is now closed for three months for a £26 million refurbishment, ahead of Vivarail Class 484 trains taking over in the spring.

A farewell event had been planned to mark the event. However, the Isle of Wight moved from COVID-19 Tier 1 to Tier 4 in just three weeks. Ferry services to the mainland have been reduced, and it was made clear to enthusiasts that visitors would not be welcome. Only a small number of people ignored the warnings.

“These trains have been operating on the island since 1989,” said South Western Railway Interim Managing Director Mark Hopwood, who had delayed leaving his job to return to his permanent role at Great Western Railway specially for the occasion. In the event, he could not leave his home in Tier 4 Thames Valley.

“But when these trains first carried passengers, Neville Chamberlain was Prime Minister. Winston Churchill had not sat in the Prime Minister’s chair. These trains served London through the Second World War, through the 1950s to the 1980s - and then crossed to the island.

“They are an icon of transport. But they have reached the point where we just can’t maintain them anymore. We can’t get the spare parts. We can’t get companies to make new bits for them.”