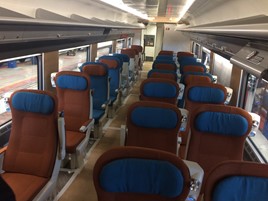 Interiors are being fitted to Caledonian Sleeper Mk 5s at Polmadie, ahead of their introduction into traffic this October on the Lowlander service.

Twenty-one coaches have been delivered to the Scottish depot, and are being used for a variety of tests.

The Seated Cars (SCs) have been fitted out, and are awaiting flip-tables. There are 31 seats in these cars (15001-15012), which also feature fittings such as USB, power sockets, LED main lighting, lockable storage and personal reading lights.

There will be increased luggage space aboard the vehicles, and space for six bicycles as well as extra space for cycles in carriers. An accessible toilet is also located in this coach.
CS told RAIL that the need for seated coaches to comply with more stringent Sleeper safety requirements than day coaches dictates the nature of the interior fittings.

The number of rooms in a Sleeper Car (SLC) is ten - two less than a Mk 3 SLEP vehicle, but which takes into account the improved facilities. Six rooms in each Sleeper coach have en suite facilities.

There are also USB and power sockets in each room, and a keycard system for access to the rooms is being introduced.