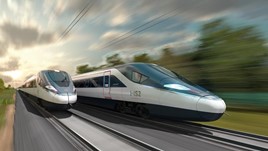 HS2 Ltd has confirmed that the classic-compatible train order will now be awarded at the end of this year, rather than in the spring. It means that the trains are likely to be ready for 2028.

There are five bidders for the contract, which is expected to be worth around £2.75 billion for 54 trains plus maintenance. Alstom, CAF, Siemens, Talgo and a Bombardier/Hitachi joint venture have all been asked to tender for the deal.

An HS2 Ltd spokesman told RAIL: “Spring assumed opening Phase 1 in 2026, which is now obviously not possible. The contract award has been shifted back so the trains are ready closer to 2028.”