EXCLUSIVE: Hope for resolution to disputes over role of guards 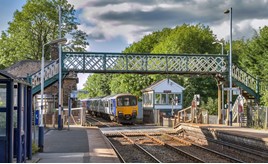 Union members voted to accept an offer made by GA which guarantees the role of the guard and halts the extension of Driver Only Operation on its services, bringing an end to a long-running dispute that has involved 12 days of industrial action being taken in the last year

RMT remains in dispute with the four other train operating companies over the retention of a second safety-critical member of staff onboard trains, but Cash believes that negotiated settlements could now be reached across the board following the breakthrough with GA.

He said: “The GA agreement shows that we’re serious about doing deals. Now it’s up to other operators to be as serious as we are, which we’ve not seen so far.

“We still have four disputes ongoing over keeping a second safety-critical member of staff on the train, but we’re confident that we’ll get resolutions thanks to the determination of our members.”

On a visit to the Birmingham Centre for Railway Research and Education on July 30, Shadow Transport Secretary Andy McDonald told RAIL: “I am optimistic because it shows what can be achieved when people sit down and talk, and I’m more confident that we will now see progress made with other operators.