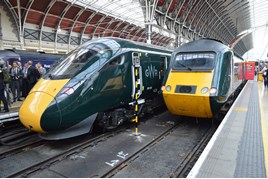 HVAC failures causing a water-leak and overheating meant that Great Western Railway's 800005 and 800006, operating the 0600 Bristol Temple Meads-London Paddington arrived in the capital late, having also suffered a pantograph fault at Taplow. The '800s' were removed from traffic.

“I am, however, very sorry and disappointed that today’s first passenger train from Bristol encountered technical issues, causing a delay to the service and an air-conditioning issue which resulted in water entering the carriage rather than being discharged externally.

“This was not to a standard that Hitachi expects and is known for. We can and will do better. Our depot teams are, as a matter of priority, investigating the root causes of today’s technical issues, and we will ensure that these are corrected as quickly as possible.”