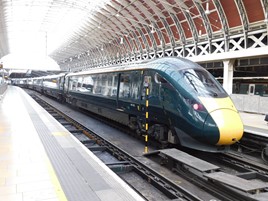 Network Rail Chief Executive Andrew Haines has poured cold water on the prospect of a renaissance in electrification schemes across the network during Control Period 6 (April 2019-March 2024).

His intervention comes despite the recent publication of a report by the Rail Industry Association (RIA) that says electrification costs could be cut by as much as 50%, while also urging government to review and renew its electrification programme.

Speaking at a RIA event in Telford on March 19, Haines acknowledged that NR had made huge strides in its delivery of electrification schemes since the beginning of GWEP in 2009.

But he did not expect government to sanction many new schemes, due to the abundance of alternative options available - including bi-mode trains, and emerging hydrogen and battery technology.

While not ruling out any new schemes completely, Haines believed that battery trains in particular presented an exciting opportunity to replace diesel traction on short, isolated sections of track with no overhead or third-rail power supply.

He said: “What I’ve seen already in my time at Network Rail is that we’ve secured lots of cost reductions in electrification - particularly in Scotland - because we have clarity in standards, learned lessons and developed the supply chain. So, I think there’s a place for it, but with caveats.”