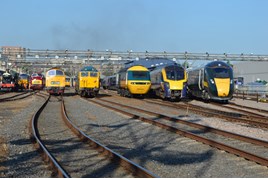 A celebratory open day at Old Oak Common on September 2 was attended by 9,000 visitors, with all funds raised donated to charity.

Highlights of the OOC111 event included a line-up of ‘Legends of the Great Western’ featuring steam and diesel of the Great Western's past and present, while an Intercity Express Programme Class 800/0 offered a glimpse of the future. Elsewhere on site, six Class 50s were also lined-up.

The event featured the naming of GWR 43093 Old Oak Common HST Depot 1976-2018 while GWR 180104 was unveiled in a livery marking the history of the Great Western, while also carrying logos for the Place2Be charity, which will benefit from the event.

Hitachi Rail Europe supplied 800003 Queen Elizabeth II/Queen Victoria, which offered a glimpse into the future for visitors, with the ‘800s’ due to enter traffic next month.