Greater Anglia charity tour marks end of ‘37s’ on May 18 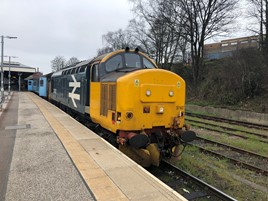 To mark the end of Class 37-hauled trains in East Anglia, a third charity railtour is being run by Greater Anglia (GA) for East Anglia’s Children’s Hospices (EACH) on May 18.

The train will feature top-and-tail Direct Rail Services (DRS) locomotives and five coaches and will visit destinations in the region synonymous with the class, which first entered traffic in the region in 1960.

GA is due to dispense with the Class 37s and Mk 2s it hires from DRS once the new Stadler Class 755 bi-modes enter traffic this summer. As a result, while this tour celebrates the end of the veteran locomotives, it is expected they will stay in traffic for a few weeks beyond the tour. GA Head of Corporate Affairs Jonathan Denby explained that the date chosen was the best available as it was before the summer timetable and that Norwich City were not at home, so there would be less crowds.

The train will run from Norwich-Ely-Kings Lynn-London Liverpool Street (via Cambridge)-Norwich (via the Great Eastern Main Line). Tickets cost £80 and all profits from the event are being donated to EACH.

Approximate timings are for a 1020 departure from Norwich, arriving at Ely at 1125, at Kings Lynn at 1207 before departing the Norfolk terminus at 1214 and arriving in the capital at 1439. The tour leaves Liverpool Street at 1627 and should arrived at Norwich at 1819.

GA is also auctioning a cab ride between Norwich and Ely, and anyone on the tour can bid for this. The participant with the highest bid received by end of May 12 will win the ride, with the money donated to EACH.

Denby added: "Taking in routes which have been synonymous with Class 37 locomotives in the past, we hope the trip will be very popular and generate an impressive contribution to EACH funds. It promises to be a great day out for all involved."

Elaine John, Head of Major Supporters for EACH said: “This will be a wonderful opportunity for rail enthusiasts to travel behind these locomotives before they leave East Anglia whilst also supporting children, young people and their families across the region.”

Bookings can only be made online via https://public.greenrailtravel.co.uk, clicking on the Special Trains/Events tab and choosing the Greater Anglia Specials option.

Anyone with any queries about the event can ring 0345 600 7245 and choose option 3, followed by option 2 to find out more details.