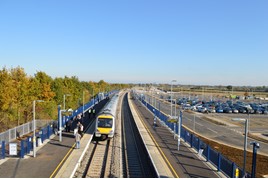 The East West Railway Company was officially launched by Secretary of State for Transport Chris Grayling on December 14, to oversee the reconstruction and eventual operation of the former Varsity Line between Oxford and Cambridge.

Grayling met with EWR’s interim chairman Rob Brighouse, Milton Keynes South MP Iain Stewart and regional council leaders to make the announcement at Bletchley station, which will become the halfway point of the new line when it is completed in the mid-2020s.

The line is being delivered in two stages, with construction already under way to complete the Western section between Oxford and Bedford. This is due to open by 2024, after the Government confirmed during the Autumn Budget in November that an estimated £1 billion worth of funding would be made available to the East West Rail Alliance (comprising Atkins, Laing O’Rourke, Volker Rail and Network Rail) to restore a disused section of railway between Bicester and Bletchley (RAIL 841).

EWR has been established to accelerate delivery of the line’s central section between Bedford and Cambridge via Sandy, which was dismantled after closure in 1967. Route decisions have yet to be taken because parts of the original alignment have since been built on, but the Government is nevertheless targeting an opening date within two years of the western section.

Grayling said: “This route should never have been closed in the first place, and it will be the biggest reopening since the Beeching era . It’s great to be here to kick off the process for an organisation that will do just that.”