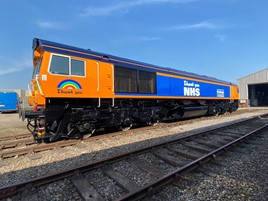 GB Railfreight, working with Porterbrook and Arlington Fleet Services, unveiled its own tribute to the NHS by unveiling 66731 in the blue and white colours of the health service on April 23.

Porterbrook, which owns the locomotive, part-funded the repaint, which was carried out by AFS at Eastleigh Works.

The locomotive will be used on trains carrying supplies from ports including London Gateway, Southampton, Felixstowe and Teesport to distribution centres across the country.

GBRf Managing Director John Smith said: “The unveiling of this locomotive is our way of saying thanks for all you are doing. We are inspired by you and wanted to say thank you in the usual GBRf way, by painting one of our regular Class 66 which will be travelling the lengths and breadths of the country to keep our economy moving during the ongoing COVID-19 crisis. Now it will also carry our message of thanks to all our carers.”

Mary Grant, Porterbrook CEO, said: “We are delighted to support GB Railfreight in thanking NHS staff and carers for all that they do at this unprecedented time in our nation’s life. Porterbrook is also hugely grateful to all the front-line railway staff, including John’s team, who are the unsung heroes in keeping Britain’s economy moving.”