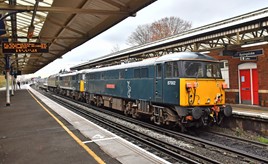 The final Class 87 to operate on the main line is one of two veteran electric locomotives that have been acquired by Locomotive Services Limited.

Main line-certified 87002 Royal Sovereign and 86101 Sir William A Stanier FRS have been bought by LSL from Electric Traction Limited.

Funds raised from the sale will be used on the AC Locomotive Group’s fleet of locomotives based at Barrow Hill.

For the past four years they have been hired to GB Railfreight and used to haul empty Caledonian Sleeper stock between London Euston and Wembley, and between Glasgow Central and Polmadie.

They were also used on the Anglo-Scottish CS trains when there was a shortage of traction.

Upon the full introduction of CAF Mk 5s on all CS routes during October, both 86101 and 87002 were made redundant because they could not couple to the new stock. Along with 86401 Mons Meg, they were sent off-lease by GBRf.

Initially, ETL hoped to hire the two ‘86s’ and ‘87’ to other rail operators. However, this was quickly deemed unlikely, and so a decision was made to dispose of the locomotives.

EXCLUSIVE: What next for 'Staycation Express?'