FROM THE ARCHIVES: Are you sitting comfortably? 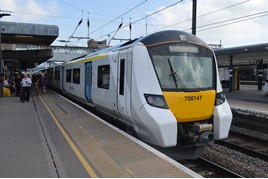 New fleets have been criticised for having uncomfortable seats? Is a lack of padding due to the need to meet fire safety and crashworthiness standards? Is there an element of DfT cost control? Or is it actually a case of not being able to please all of the passengers all of the time? PHILIP HAIGH reports

Are you sitting comfortably? Then I’ll begin.

Two recently delivered fleets of trains have caught headlines for their seats being anything but comfortable. Both were procured by the Department for Transport, rather than train operators. Thameslink’s Class 700s will now be known for having ‘ironing board’ seats, while the Class 800 series procured under DfT’s Intercity Express Programme (IEP) has also disappointed some people.

Seat comfort is very difficult to specify. Seats might form the third suspension link between you and the track, but comfort cannot be defined in the same way as the springs and dampers fitted to bogies under the train. What is comfortable for one passenger is not to another.

A plastic bucket seat might be good for a short journey, but it’s unlikely to find favour over long distances. The biggest difference between First and Standard Class is usually the seat. And the biggest difference in the seats is usually their padding. Old-fashioned seats of steel springs and horsehair now live on preserved railways, so today’s padding is almost always foam.

This foam must meet certain standards. While comfort is hard to define, the performance of seat foams in fires is not. It’s an important test that examines a material’s propensity to burn and the quantity of smoke it produces (and those tests include cutting the seat cover, as a vandal might). For trains that spend time in tunnels, smoke is particularly important. Ladbroke Grove’s collision in 1999 and Taunton’s sleeping car fire in 1978 graphically illustrated the dangers of fires on trains.

According to Thameslink, fire standards is the reason why the seats on its Class 700s have so little padding, hence the discomfort. Spokesman Roger Perkins sent RAIL a statement: “Padding in the seats is constrained by the latest fire standards, which are very strict on modern trains, and is also vandal-resistant. This does give it a firmer feel. The shape and size of the seats also had to meet today’s extremely strict crashworthiness standards.”

RAIL put this view to RSSB (Rail Safety and Standards Board), which is the custodian of standards. Head of Rolling Stock Hugh O’Neill was blunt in his response: “It’s absolutely not true that seat comfort is related to fire standards.”

He explained that there was no reason why thicker foam could not be fitted, and added that he thought the reason for the thin foam on Thameslink’s Class 700 seats was entirely commercial. If you wanted to fit a set number of seats in a coach, you could either make the distance between them smaller or you could make the seat backs thinner, he said.

O’Neill acknowledged that thicker foam was likely to cost more, which suggests that DfT was specifying to a cost when it procured the fleet. It also decided not to fit folding tables to the backs of seats, or cup-holders. Both features contribute to perceptions of comfort even if the rest of the seat is unchanged. This is because, as O’Neill explained, seat comfort is related to what its occupant is doing.

An RSSB research report from March 2016, Measuring Rolling Stock Seating Comfort, explains: “The level of comfort/discomfort is also related directly to the passenger’s activities. Different postures will be assumed for different activities, and the same seat may not provide functionality for all. For example, the level of comfort required while working on a laptop will differ from the comfort levels necessary for sleeping on the same seat in the same train.”

Given British commuters’ love of take-away coffee, failing to provide somewhere to put the cup will irritate them. That irritation may manifest itself in complaints about uncomfortable seats, which might explain why Thameslink’s Class 378s have not generated the same complaints, despite having similar seats from the same supplier.

In February RSSB announced further work, based on 2016’s report, that will attempt to define what’s needed to specify a comfortable seat.

RSSB Senior Human Factors Specialist Jordan Smith explained in February: “There simply aren’t any reliable industry-approved measures to quantify passenger train seat comfort - they don’t exist. The rail industry wants us to challenge that, by exploring the potential of a new specification which takes full account of the complexity of the human factors involved, and allows owners, suppliers and government procurement teams to efficiently specify and deliver seating in line with passenger comfort.”

Siemens built Thameslink’s Class 700s. As part of the design process, two seats from different manufacturers were put under test by Siemens and First Capital Connect (the train operator at the time), with stakeholders’ views invited. Perkins explained: “From this the current seat was selected which, after modification, provided the greatest comfort and met all the constraints of the safety and capacity requirements.”

Mention of capacity appears to confirm the commercial nature of the decision to fit thin seats.

Great Western Railway is the first to use DfT’s IEP trains, built by Hitachi. Designated by the operator as Intercity Express Trains (IETs), they entered service last year and are gradually replacing High Speed Trains (HSTs) on GWR’s long-distance services from London Paddington.

GWR spokesman Dan Panes told RAIL that it conducts quarterly surveys of its passengers, along similar lines to the half-yearly efforts of Transport Focus for the National Rail Passenger Survey (NRPS). GWR’s results, said Panes, were usually within a couple of percentage points of NRPS.

Using these internal surveys, Panes said that passengers were finding the seats on the IEP trains more comfortable than those on HSTs. 80% of passengers said they were as good as what went before, compared with 75% for HST seats six months after their seats’ introduction.

Some context is important. When GWR changed the seats on its HSTs a few years ago in response to commuter pressure for more seats, the new seats “got a real kicking”, according to Panes. Couple this with the brief for the Intercity Express Programme, which was (said Panes) that “Standard Class seats on IEP be as good as we have now”.

He dismissed any suggestion that DfT imposed a seat design on GWR, saying the operator had tested the seats with IEP’s other imminent user, East Coast. “The idea that we’d accept seats considerably worse does us a disservice,” he argued. Panes noted that those passengers who didn’t like the IEP seats had been very vocal about it.

GWR’s surveys don’t split Standard and First Class passenger views. General perception suggests that IET’s First Class seats are worse than those on HSTs, which were recently the subject of an extensive upgrade, but there’s no survey evidence to prove or disprove this.

“The trains and seats are doing a really good job for us,” Panes concluded.

Over at Thameslink, Roger Perkins admitted the company had not surveyed passengers, so couldn’t say whether its passengers liked or disliked their seats.

RSSB’s Hugh O’Neill also dismissed Thameslink’s crashworthiness claim. A seat meeting crashworthiness standards will have a stronger frame and fixings to the carriage than one that doesn’t. This doesn’t affect comfort, he said. “That’s in the padding.”

Some Class 700s now have seat-back tables. There will be 69 sets without tables for which Thameslink is considering a retrofit option, Perkins told RAIL. Retrospective installation is usually more expensive than factory-fit, so it seems that the DfT’s attempts to cut costs could come to naught.

Were Thameslink gathering customer views in any meaningful way, the addition of tables should be reflected in those views. Adding tables makes the space in which a passenger sits more usable and more convenient. Designing useful space surely makes passengers feel that they are the beneficiary of some thought and effort from the design team, rather than being simply self-loading cargo.

And in that there’s clearly a lesson for those specifying and designing trains.