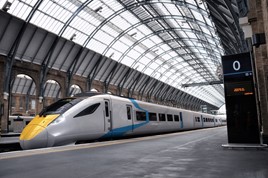 The first Class 803 electric multiple unit for FirstGroup’s East Coast open access operations has arrived in the UK for assembly at Newton Aycliffe.

FirstGroup has five five-car EMUs on order from Hitachi. They will be fitted with batteries, although these will not provide traction performance - instead, they can power on-board services should the train fail.

This is the first of the Class 80x fleet to have batteries fitted, although the manufacturer hasn’t ruled out fitting more powerful batteries (which could provide power) to its existing bi-mode fleets.

The second and third Class 803s are due in the UK during May and will also move to Newton Aycliffe.